There is something special about when artists like these collaborate. Two independent talents, both completely self-sufficient choosing to come together and see what happens, to let the muses mingle and share the results with the rest of us. What we have here, however, is not some quick jam caught on tape but a long distance collaboration carefully put together over three years. The result is something that gives us a broad overview of the two talents spotlighted here, showcasing many different moods, sounds and styles. Created like an exquisite corpse story they sent each other music to work on with no instructions or suggestions, just some inspiring mix tapes of everyone from Duke Ellington to Harry Patch. They clearly found their way.

As well as her own music (which ended up on Pitchfork’s best of 2015 list), Delphine runs the excellent Wild Silence record label. As well as being a solo artist, Mocke has played with the likes of Arlt, Holden and Midget !

On this record, Mocke plays the guitar and Delphine sings and plays everything else. He’s one hell of a guitar player, bringing to mind Loren Connors, John Fahey and anyone who ever took a six string and mastered it their own damn way. Delphine sings sweetly, sometimes from classic texts or as a glossolalia (divinely expressing without words), though to a non-French speaker you would swear was some lost classic pop song reinterpreted in her own style.

Both Delphine and Mocke are originally from Paris but both have long since left, Mocke for Brussels and Delphine for the deepest French countryside. That difference can be found in their music. Mocke’s music is urbane with a touch of inner-city paranoia. Delphine’s music always sounds isolated in a big landscape. They compliment each other as opposites.

Like all Okraina releases, the stunning artwork is by Gwénola Carrère and I can’t think of anyone better suited to try and encapsulate this stunningly varied and vivid album. The title does not translate to English as it is a poetic corruption of a common phrase. I think something similar happened to common music on this album. 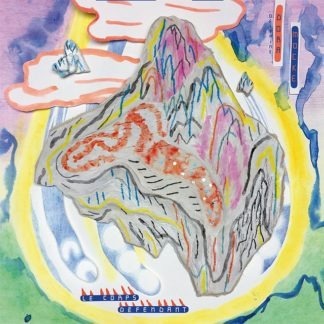