ED SANDERS : Yiddish Speaking Socialists of the Lower East Side – 10″

“Yiddish-Speaking Socialists of the Lower East Side” by Ed Sanders (b. 1939, founder of the mythical Fugs in 1964; also writer, publisher, activist, etc.) is an epic piece of almost 18 minutes’ length, a vocal setting of a dense and reasoned text that runs to 8 typed pages, 1400 words, 8500 characters. First issued on cassette in 1991 by the label Hyperaction P.C.C., the piece recalls an almost fifty-year history of Jewish militancy in New York by poetic means – combining historical scholarship, emotion and clarity the echoes of the past found in the present: of the pogroms and escape from Eastern Europe in the 1880s up to the death of Meyer London, the Socialist member of Congress, in 1926 (not overlooking exile, the crossing of the Atlantic, arrival at Ellis Island, back-breaking work in the sweatshops, the creation of political parties and trade unions, the outbreak of the First World War – the rupture in the narrative caused by this is marked here by the passage from the A-side to the B-side of the record). This is a literary project that is simultaneously ambitious and highly personal and which cannot help but recall America, a History in Verse, which has occupied Ed Sanders for almost 15 years and which, over more than 3000 pages, recounts in verse the history – both poetic and political – of the United States.

For this recording (solo… and mono) of “Yiddish-Speaking Socialists of the Lower East Side”, Ed Sanders accompanies himself on the “pulse lyre”, a small, finger-operated synthesizer which he invented himself in order to accompany the declamation of his texts in the manner of the acoustic lyre used by the ancient poets (Sanders studied Greek at university).

“Yiddish-Speaking Socialists of the Lower East Side” is a text (and a recording) of dual resonance: animated by the fits and starts of history as well as the rhythm of the writing (and reading) of Ed Sanders. 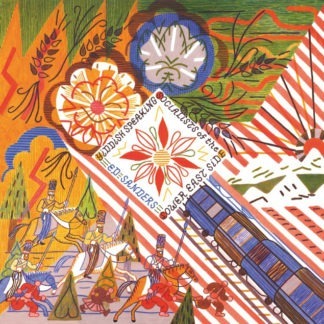 You're viewing: ED SANDERS : Yiddish Speaking Socialists of the Lower East Side – 10″
Add to cart