Given Jones’ rather slack approach to track titles (both being consistent with and sometimes even just supplying them), it’s a bit of a relief to realize that two tracks with the same name are indeed related. In the case of “Arab Jerusalem”, which makes up nearly half of the newly-released Lalique Gadaf Handgrenade, that kinship is immediately apparent even though both tracks are clearly their own experiences.

Released as the rst track on the Minaret-Spearker picture disc 7” in 1996, “Arab Jeruzalem” (spelling also sometimes being fairly slack) is 5:42 of effectively shifting dark ambience, wordless female vocals drifting over the hand percussion, chimes, and static of the track, with eventual conversational loops discussing… something underneath. The end of that version is especially striking for the way the woman’s wordless singing starts being sampled in such a way that it overlays the whole track (and, slightly, itself). The almost 24-minute “Arab Jerusalem” here might be called the Deer Hunter version of the same story, building with great patience and many more abstract detours towards what now seems like simultaneously an excerpt and, now, a climax. As with many of Jones’ more ambient tracks, the great length just lets it cast its spell more thoroughly and entrancingly.

The other three tracks, meanwhile, suggest some of Jones’ other work but never evoke them as directly as “Arab Jerusalem”. “Jordan River” is nearly as long (a second shy of 20 minutes) but strips out the vocal elements in its predecessor, focusing instead on a more active percussive workout (analogue and digital both) and a river of hiss running down the center of the track. The title track of Lalique Gadaf Handgrenade might bring to mind the title of “Lalique Gadaf Jar” from Libya Tour Guide (last reissued by Staalplaat in 2015), but if they’re sonically related Jones must have practically melted the other track to get this one. And the closing “Desert Gulag” (like the title track, a much more manageable length than the rst two epic tracks here) bears a slight resemblance to “Negev Gulag” from 1996’s Fatah Guerrilla, here what was a piercing, repetitive drone is softened and looped over more of Jones’ percussion. The result is a well-rounded release that shows off many aspects of Jones’ sound as Muslimgauze, while existing (like many of these DAT tapes do) in conversation with much of his previously released work. 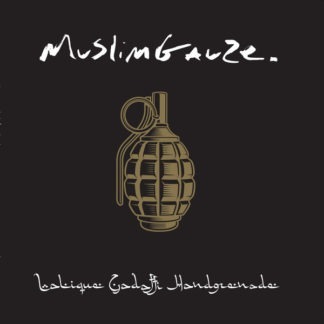