‘’Ariha is a combination of 3 of the most innovating figures of modern day trumpet playing with tuba virtuoso Carl Ludwig Hubsch.

The quartet recorded this session in Beirut 2013, after a week’s residency and performances. The four like-mind players open the disc with “Mar Mikhael in The Afternoon,” the longest improvisation at 16-plus minutes. The fluttering of notes is accompanied by the snorting of unseen wild beasts and the coyote howls of brass. Their language, developed in the past 20 years or so, is a direct descendant from the European (as opposed to the American) systems and improvisers such as Derek Bailey, Eddie Prevost’s AMM, and Paul Rutherford.

Stripped of the conventions of noted music, the growls and micro-notes would not be out of place in sci-fi cinema as the backdrop to the silence of an orbiting space station. The squiggles and on/off switches of sounds inhabit the ghosts in the machines of the imagination, but also the rumble and hum of the earth’s inner core. “Hamra Drinks” buzzes with the low (really low) bass reverberation and the looping notes of trumpet that take on an organic biologic shape. Each piece conjures a response be it a visual, an emotional, a fragrance, a flavor, or something tactile. Ahira Brass Quartet opens the listening experience to all five senses.’’ Mark Corroto in All About Jazz 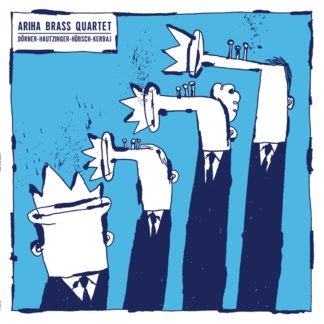