Honest Jon’s Records present a reissue of Derek Bailey and Tristan Honsinger Duo, originally released by Incus in 1976. Born in Burlington, Vermont, and conservatory-trained in the US, the cellist Tristan Honsinger moved from Montreal to Amsterdam in 1974, quickly linking with Han Bennink and Misha Mengelberg and opening a long and fruitful musical relationship with Derek Bailey. Recorded in 1976, Duo displays a performative musical approach already characterized by the lack of inhibition which would later endear him to The Pop Group: he is knockabout, exclamatory, explosively rhythmic; burping Bach and folk melodies with spasmodic lyricism, in amongst the garrulous textures and accents of his scraping, bowing, and plucking, and gibbering like a monkey; throwing out his arms and stamping the floor, grappling with his instrument like an expert clown, always tripping himself up. You can hear Bailey reveling in the company, as he ranges between scrabbling solidarity and an askance skewering of his partner’s antics, on prepared (nineteen-string) and standard electric guitars — and a Waisvisz Crackle-box, for the garbled, quizzical, cross-species natter which closes “The Shadow”. Throughout, the spirited interplay between laconic, analytic wit, and guttural, sometimes slapstick physicality is consistently droll, often laugh-out-loud funny; vigorously alert, alive, and gripping. 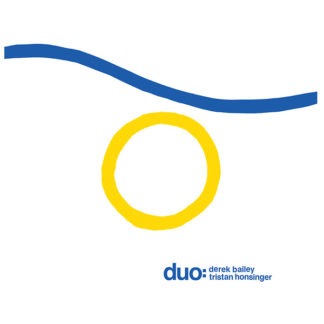