For Gérard Marais, guitarist with Dharma (the quintet), from this third album (in fact he replaced Gérard Coppéré, one of the two saxophonists present on the first album), Albert Ayler’s instruction to play your own music was the detonator. This did not fall on deaf ears, and was particularly appropriate as it would have been difficult, even for a musician attracted to free jazz, to make something of his own from the esthetic and political direction taken by Cecil Taylor, Archie Shepp or Sun Ra. What could be summarised as ethnic differences. The quest was to find one’s own music, whatever the more or less apparent roots. For, at the beginning of the 1970s, Gérard Marais and his comrades in the Dharma Quintet were overwhelmed by electric period Miles Davis. Not the band with Pete Cosey, which was still gestating, but the one fascinated by electronic keyboards and the famous Fender Rhodes which added so much to the atmosphere of In A Silent Way. From the beginning of Dharma, but without ever copying anyone, Patricio Villarroel played the role of Chick Corea with Miles Davis. While Gérard Marais whose fulgurant playing dynamised the group, was at the level of John McLaughlin, or Sonny Sharrock at the same period. Another important soloist, alto saxophonist Jeff Sicard was as inventive as Byard Lancaster, Noah Howard, Gary Bartz, Marion Brown or Sonny Simmons. It’s difficult to do any better! Questioned by a critic, years after the group split, Gérard Marais insisted on it being an idea born of the seventies, which seemed the only creative way to enable written music and improvisation to co-exist. This was a philosophy that he would continue to develop within Michel Portal’s group, on Splendid Yzlment, but also in a great duo with Joseph Dejean (of Full Moon Ensemble), and yet again in a trio led by drummer Stu Martin, with two guitars the other being Claude Barthélemy. The Dharma Quintet, made their mark, appearing under the letter D, between Dedalus and Dies Irae, on the list of major influences created in 1979 by Nurse With Wound. 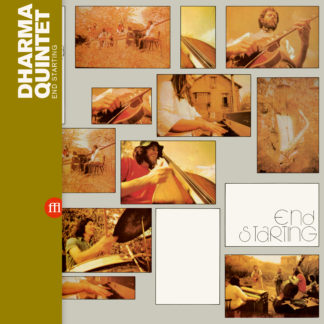