UnrockLP003) Hayvanlar Alemi, led bei Ozum Itez (git) and Isik Sarihan (percussion), are a group of contemporary musicians from the underground scene of the Turkish capital Ankara. Their genres are psychedelic-, surf- and instrumental rock extraordinaire, flavored with an oriental Oeuvre….They released some domestic CDs in Turkey earlier before their international debut came out on Alan Bishop’s and Hisham Mayet’s Sublime Frequencies label in 2009. “Guarana Superpower” sold out in only a few weeks.

“Twisted Souvenirs” documents a fast-paced development to an elegant, highly complex, genuinely performed melange of the most exotic possible influences. They position themselves close to their roots but open up at the same time to influences from the East and West and beyond. Reminiscent of Sun City Girls´ “Torch Of The Mystics” phase, influences of Cambodian Retro-Rock and electrified Thai Mor-Lam are as deeply anchoraged in their soundcarpet as the glittering guitars from the Sahara. Hybrid-music galore.

“Karecikler Dolmadan” once the intro of their latest live set, became one centerpiece of the album. “Yekermo Sew” a careful new interpretation of the Mulatu Astakte classic and “Geneva Incident” are highlights amongst an album where each and every song is unique and recognizable. With a steady hand Hayvanlar Alemi put pieces together from the global fund and make it a perfect entity. Elegant, with discreet gesture: „It’s only Rock n’ Roll – and who are you not to like it?” Let the music do the talking. 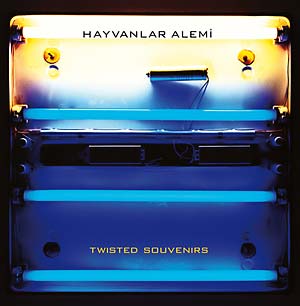