The idea in the mind of Richard Pinhas, the driving force behind Heldon, was to produce music “as cold as a huge block of ice” a vertiginous experience, of course influenced by the ‘Crimson’ trilogy, from Larks’ Tongues In Aspic to Red, except that Heldon represents an electrified version, leading to a perfect rapport between thought and emotion, perhaps going even further.

It’s Only Rock’n’Roll (1975), the appropriately-named third album, is in its own way – already – a turning point in Heldon’s œuvre, witness the acid and corrosive “Zind Destruction (Bouillie Blues)”. Once the next one was released (Agneta Nilsson), just after Disjuncta, the first French independent label, had been sold to Urus by Richard Pinhas in order to buy the aforementioned Moog 3 from the Beatles, the music became even more uncompromising. The group delved, like King Crimson, into a kind of trilogy, the middle of which was Interface in 1977, a year after Un Rêve sans conséquence spéciale which was, thus, the first part. At this period the group’s music, as Gérard N’Guyen wrote in the fanzine Atem, was like “a guided tour through the ruins of a civilisation”.

In the middle of the punk wave, the universe of Heldon indeed became more threatening and heavy, echoing the novel by Norman Spinrad from which the group took their name, The Iron Dream. This was also the point at which Heldon became a genuine group, centred around Patrick Gauthier (synthesizers), Didier Batard (bass) and François Auger (drums), which allowed Richard Pinhas to focus on the real motivation behind this audacious undertaking.

Like its’ predecessor Un Rêve sans conséquence spéciale, and then Stand By, which followed, Interface, the second album of the “trilogy” recorded at studios Davout, represents a sonic culmination, even a climax, its’ violence coming from the machines and delving into notions of repetition and scansion, prefiguring a lot of the music that was to follow, whether it be electro and industrial or post-rock and noise. It goes without saying: seminal and always innovative! 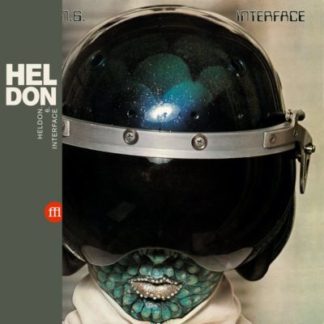