Ornette Coleman’s “Lonely Woman” on the radio, Renaissance motets, his grandfather in a Zouave military band, Syrian deserts… Columns of tanks in the streets, the soundtrack to Robert Bresson’s’ ‘A Man Escaped’, Juan Manuel Fangio’s car, the fall of the Berlin wall: from the first and fantastic Musiq Musik, this is where Jac Berrocal’s trumpet comes from – an indescribable cataclysm to which he constantly returns for inspiration.

When he published, at the beginning of the 1990s, La Nuit est au courant, Jac Berrocal had already recorded his famous “Rock’n’Roll Station” and collaborated three times with Nurse With Wound, he figures on their 1979 list as an important avant-garde influence. In Situ, the French label which published this album, produced several other historically important albums in the same year by people like Steve Lacy, François Tusques, Un Drame Musical Instantané and Daunik Lazro in a duo with Joe McPhee: such were the times!

Backed by two bassists (including the jazz critic Francis Marmande) and a drummer (Jacques Thollot, who recorded Jeter la girafe à la mer one of the highlights of the French underground), Jac Berrocal does here what he does best: defy labels and slalom between genres; constructing a strange kaleidoscope of enchanting mish-mash. “What is vulgar…”, he states, “…is to refuse what pleases you”. Jac Berrocal refuses nothing and tries everything he can imagine.

With the trumpet multiplied here and there by reverb’, the nocturnal perambulations for insomniacs of La Nuit au courant make it an ambient album with Prague, Sartrouville, Ivry-sur-Seine or East Berlin amongst the backdrops… An album of what Fernando Arrabal called “panic music”, an elegant term for “no wave”… Listening to it over and again, it sounds for all the world like Don Cherry jamming with David Bowie and Brian Eno in Berlin.

There is one thing you should know: Jac Berrocal is an intrepid man. He stands exposed – and “sullies his soul”, on the edge of the precipice. The nights are all-knowing.
–
First ever vinyl edition of this classic recording
700 copies – Obi Strip – Reverse Printing
4 page booklet 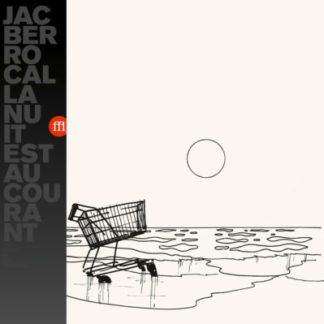