Brave new old work by Vicki Bennett aka People Like Us. A journey into her early radio experiments with some dating back 20 years!

Vicki Bennett’s People Like Us began life as a three hour radio show on Brighton’s Festival Radio in 1990 called Gobstopper. She went on to release around 20 solo albums based on her radio sound collages, and after a decade working primarily with sound, has increasingly worked with film and images. She has recently produced collage and multi-screen, multi-speaker work, including 2013’s touring film and performance piece Notations, a film used as a score for improvising musicians, and Gone, Gone Beyond (2017-?), a 10 screen, 8 speaker immersive cinema work for Recombinant Media Lab’s Cinechamber.

An advocate of open digital distribution, Bennett’s entire back catalogue is available for download via UbuWeb, and she is also the host of long-running radio show DO or DIY on WFMU. She has collaborated extensively with Ergo Phizmiz, Negativland’s Don Joyce, Wobbly and Kenneth Goldsmith, and many others. Vicki Bennett also curated/programmed RADIO BOREDCAST in Winter 2011/Spring 2012. It was first broadcast on basic.fm and now is archived at WFMU. More recently, Vicki Bennett has programmed OPTIMIZED!, a week-long expanded radio stream on WFMU 6-10 June 2016. 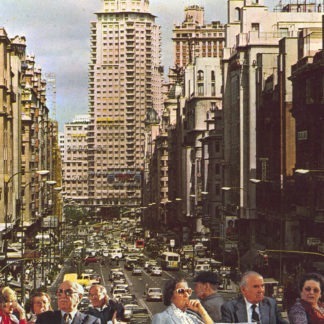 You're viewing: People Like Us – Early Radio Works Vol. I – CREP41 LP
Add to cart