Originally, Peür acts as a duo, armed with an electric guitar sharpened like a billhook, a saturated drumkit that hammers the sound space like a construction machine, and other sources of sound transformed by DIY devices. Sometimes, and this is the case, Fabrice Decemme and Mathieu Gratedoux, are joined by Didier Bourgoin, historical figure of the music scene from Poitiers (france) and creator of the Fanzinotheque, for the voice, the text thrown without artifice in the music, in a kind of brutal letting go to make many self-proclaimed improvisers pale.

Autobio / Motobio, between anecdotes, feelings and free digression of thought, the voice carried by the voice races like the projections of the guitar of the comrade, the sounds call sense that call others in a metonymic urgency that allows despite everything to stand above the void.

Peür is an enigma. You won’t know much more, you will just find links with other french musical activists, limited edition productions, a split tape with Jean-Louis Costes… clues, therefore, signs of a state of mind frankly engaged in the margins and the « pratiques brutes de la musique ».

La Belle Brute is very proud to collaborate with Les Potagers Natures in the edition of this beautiful 10-inch silkscreen printed at 300ex. 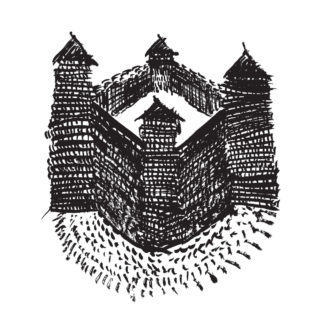