SPACEMEN 3 : For All The Fucked-Up Children Of This World We Give You – SV155LP

In 1984, Spacemen 3 made their first-ever recording session and sold a few cassettes at now-legendary, incendiary gigs. Growing out of the dual guitar attack of Jason Pierce and Pete Kember, the band’s three-piece line up with Natty Brooker on drums offered a liturgical take on ’60s psychedelia, bare-knuckle blues and stunning feedback.

This early glimpse into the Spacemen 3 cosmos – crafted by and for all the fucked-up children of this world – captures the band’s unorthodox approach to rock ‘n’ roll with nuance and power. While the raw atavism of “Things’ll Never Be The Same” and “Walkin’ With Jesus” would be scaled back considerably on later recordings, the one-chord propulsion of “T.V. Catastrophe” and hardwired stomping of “Fixing To Die” draw from a primitive force that served as the impetus for the group’s formation.

For All The Fucked-Up Children remains the perfect introduction to Spacemen 3. Not only do these demos reveal the auspicious beginnings of two teenagers born on the same day in Rugby, England, but also compelling clues that point toward the exploration and eventual refining of their signature sound. 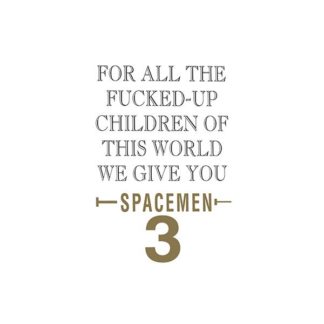 You're viewing: SPACEMEN 3 : For All The Fucked-Up Children Of This World We Give You – SV155LP
Add to cart