For over half a century, Takehisa Kosugi was one of the most unique and enduring figures in the Japanese underground. As an art student in Tokyo in the early ’60s, he joined the Fluxus-styled performance unit Hi Re Centre and founded the improvisational ensemble Group Ongaku, but his most legendary project was The Taj-Mahal Travelers – a multicellular organism that included Kosugi, Ryo Koike, Yukio Tsuchiya, Seiji Nagai, Michihiro Kimura, Tokio Hasegawa and sound engineer Kinji Hayashi.

With a penchant for long psychedelic jams (some lasting 12 hours or more) The Taj-Mahal Travelers lived up to their name. Touring in a Volkswagen van across Europe and Asia in the early ’70s, they eventually reached the actual Taj Mahal in India. Upon their return to Japan, they held a concert to raise more touring funds and released their very first recordings. Their debut album, July 15, 1972, would extend the band’s matter-of-fact titling: all the tracks were named precisely for the times they began and ended.

With a grab bag of instrumentation (electric violin, double bass, santoor, vibraphone, harmonica, radio oscillators, sheet iron, etc.), The Taj-Mahal Travelers weave together mesmerizing waves of sonic texture. Featuring longtone concepts that Kosugi discovered while working with sound generators in New York in the mid-’60s, July 15, 1972 remains just as much a collective tone poem as psych workout. These leader-less sounds coalesce into a unified whole that feels both subconscious and sublime, as if the waveforms bypass the listener’s ears and land directly inside one’s synapses.

This first-time vinyl reissue is limited to 900 numbered copies. Comes with poster. 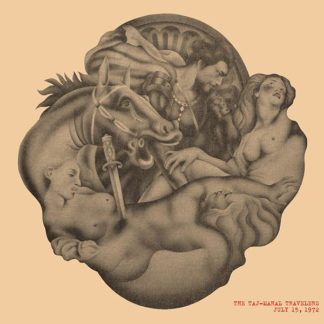