The Photographs of Charles Duvelle

Disques Ocora, a French label dedicated to capturing and publishing the sounds of folkloric culture from around the world, is held in the highest possible regard in the realms of professional and amateur ethnomusicology. Instigated in 1958 by Pierre Schaeffer, the founder of musique concrète, Disques Ocora’s sterling reputation is largely built on composer and musicologist Charles Duvelle’s pioneering field recordings, as well as his now-iconic photographs and graphic design.

Charles Duvelle’s work is indisputably one of the most important contributions to the human understanding of the rich biodiversity of our planet’s music and language. In 1977, his field recordings from Benin were selected by Carl Sagan for inclusion on the Voyager Golden Records, which were carried into outer space by the Voyager spacecraft to stand as an example of humanity’s highest musical expressions for the universe’s unknown listeners.

Sublime Frequencies’ most ambitious project to date, this 296-page fine-art photography book comprises an exhaustive collection of Charles Duvelle’s field photography from 1959 to 1978, demonstrating that this master musicologist had an equally unerring eye for photography. It also contains an exhaustive interview with Charles Duvelle by Hisham Mayet, detailing the history of the label and offering Duvelle’s unique insights into the discipline of field recording. The package includes two full-length CDs of archival recordings (some of which have never been published) selected by Duvelle himself.

In a tribute to Disques Ocora’s exquisite design sensibility, the book is printed on 170gsm Lumisilk matte artpaper and bound in grey buckram with gold foil stamping on the cover and spine. The front cover includes a tipped-on glossy photograph by Charles Duvelle.

• “Eastern Music in Black Africa,” a 17 page report prepared by Charles Duvelle at the request of UNESCO, February 1970

Produced and edited by Hisham Mayet 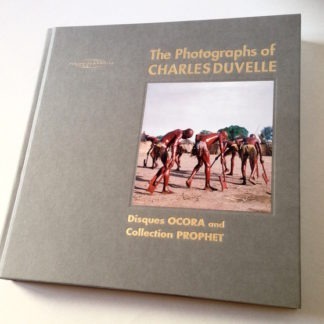