The 5th Sublime Frequencies volume in Laurent Jeanneau’s amazing documentation of vanishing indigenous music of the rural Asian frontiers, this CD focuses on ethnic minority groups of Southern China. Presented here are 17 tracks of supremely infectious vocals and folkloric instrumentals played on a wide variety of local traditional instruments. The centerpiece of this collection is the 13 minute Do Djui Atsei (track 5), an absolutely epic male and female group choral vocal piece which is improvised as a song of intimate personal emotions that brings tears to the performers as they are singing together. Jeanneau has spent many years traversing the hills and valleys of Southeast Asia and China, and he has captured a dizzying array of folk music, much of which has never been documented before. He is perhaps the most committed and accomplished procurer of rare and threatened music from the region and seems more focused than ever as he states in his liner notes for this release: “In China, by the end of the 1950s, 400 ethnic groups registered to be counted in the census. There might be 300 remaining groups nowadays. I was facing an incredible amount of potential musicians. Now after 6 years spent in Yunnan, Sichuan and Guizhou provinces, I have recorded 55 CDs of raw stuff. This Sublime Frequencies product is a compilation from those CDs, displaying the diversity I was able to find between 2006 and 2012, and I’m not finished….”

This disc comes with a 16-page booklet of detailed notes and photographs of the musicians by Laurent Jeanneau. 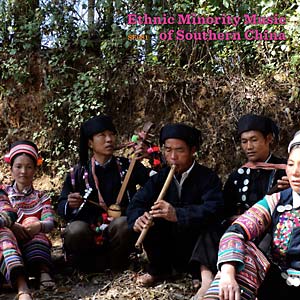