The collective methodology of the Workshop de Lyon led to the creation of the ARFI (Association Searching for an Imaginary Folklore) in 1977, their aims were very much a mission statement “encourage improvisation, spread diverse musical styles and provide means of expression to others with similar ideas, establish a folklore…”
Their reference was the A.A.C.M. (Association for the Advancement of Creative Musicians) created twelve years previously with the similar idea of providing material assistance to and defending the interests of creative musicians, to encourage the emergence of new music. The open-structured ARFI self-produced their music thanks to their own label, on which almost all of the albums of the Workshop de Lyon appeared, from Concert Lave onwards.

Their third album, Tiens ! Les bougeons éclatent… is a perfect example of how the group sounded when it was released in 1978, about a year after the studio recording. Pianist Patrick Vollat had left but was still very much a part of ARFI (in particular as part of the excellent Marmite Infernale), so the Workshop de Lyon stabilized to a quartet of Louis Sclavis, Maurice Merle, Jean Bolcato and Christian Rollet, and already had at the time an unparalleled repertoire. This never ceased to expand, through the meetings and personnel changes, while losing nothing of its generosity nor showing any signs of ageing. This proffers on the Workshop de Lyon a certain universal dignity which honours their original models, Albert Ayler or the Art Ensemble of Chicago to name but two, transfiguring them into a new, exciting aesthetic approach bursting with openings and exchanges. Irresistible!
.
– First ever vinyl reissue of this classic recording
– 700 copies – Obi Strip – Reverse Printing
– 12 page booklet 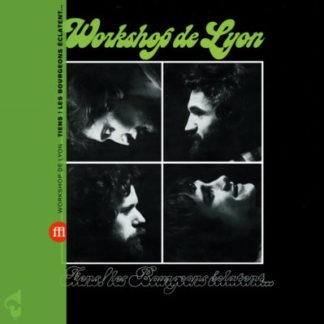