Ayuune Ayirizeme Suley,often going by the shorter Ayuune Suley, is best known by his fans simply as Sule. Born on 16thMarch, 1979 to a popular business man called Baba Ayirizeme and a pito brewer, Asibi. He learned to play in his mothers pito bar. Now he is one of the great kologo players of Ghana and part of the world famous King Ayisoba Band.

Ayuune Sule brings the Soul into Kologo Power. In Kumasi, the second city of Ghana and capital of the Ashanti region, Ayuune Sule is the main kologo star. The most famous kologo player these days in the whole of Ghana and abroad is King Ayisoba. Together with King Ayisoba, Guy One, Atongo Zimba and Sambo, he represents the generation that broke kologo music outside of the North East Region of Ghana. In Europe we know Ayuune Sule as a member of King Ayisoba’s band and as a solo artist who often opens up for his shows. In 2015 he released his 7″ single with the songs “What A Man Can Do A Woman Can Do More Better” and “Who Knows Tomorrow” on Makkum Records (MR12), which put his name out into the western scenes.

And now there is the full length album of Ayuune Sule! When listening to Sule’s guest vocals on King Ayisoba’s albums you hear the warm velvet voice of Ayuune Sule as a striking contrast to King Ayisoba’s forceful rasping vocals. “We Have One Destiny” is full of that velvet tone and true West African soul power. Living in Kumasi makes it easy for Ayuune Sule to be influenced by southern Ghanaian music styles such as Azonto and Hiplife and fuse those with the rhythms and scales from the north. This album is a true mix between modern and traditional as Ayuune Sule included the song “Senyaane”, an acoustic song with just the sinyaka (the kalebas filled with hard berries that sounds like a giant maracas and is hit and thrown up between two hands played by Sule in King Ayisoba’s band) and his voice. 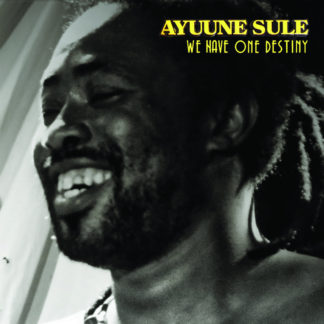 You're viewing: AYUUNE SULE : We Have One Destiny – RUP001 LP
Add to cart