out now digitally and on vinyl: normal black and limited edition marble colour!

out now digitally and on vinyl: normal black and limited edition marble colour!

Mexican musician Memo Pimiento grew up in D.F. Mexico City, a sprawling metropolis of 25 million people, twice the size of Belgium’s population. He lived in various barrios (neighbourhoods) of D.F. and also in some small towns like Playa del Carmen on the Caribbean coast and San Miguel de Allende in the centre of the country.

In Mexico he met his Belgian girlfriend Manon Amen, who is from Brussels. In 2012, they decided to live between Europe and Mexico, to escape the wet and cold Belgian winters. The rest of the year, Brussels is their perfect base for its very cosmopolitan vibe and the interesting open and eclectic music scene.

About his first musical steps Memo says: “I studied at a classic music school, but I stopped that to play rock and electronic music and started playing music in rock bands. I did courses on sound design to introduce myself to electronic devices and playing with different bands between electronic music and rock also helped a lot. At that moment cumbia was not on my horizon at all, because in Mexico to play cumbia was really not so cool like it is today. It was considered commercial music for low class people. Later, when I worked at a local TV channel, I composed and produced music for TV ads in a totally commercial context and I had to learn all the different popular music styles for this job. Thanks to that I could revalue and appreciate the popular rhythms, like cumbia, salsa, polka, etc. At the same time I started a new project where I used different popular Mexican rhythms to make electronic lounge music in a jazzy vibe, which was called Pimiento Pastel. This is also where the name Memo Pimiento came from.”

For several years, Memo and Manon also had an electro 80’s pop duo called Zorroz. Meanwhile Memo was also part of different music groups such as a Belgian group that made music for children in Flemish schools, an African reggae hip hop band, a traditional Mexican Mariachi band and even doing a residence project with trip hop and experimental music with a female singer at the Ancienne Belgique venue.

At a sudden moment Memo was ready to launch another alternative project. This happened in January 2016, while he was on vacation in the Spanish Canary islands. When walking on the beach, he heard beats in the distance that reminded him of Mexico, like when arriving to a Mexican barrio street party, hearing and feeling the bass.

He started to imagine melodies played on analog synthesizers and it seemed a good idea to him to play popular cumbia songs as if played by Kraftwerk or Depeche Mode. Back in Brussels, Memo started to work on composing and covering versions of his first band Pimiento Pastel and songs from bands of friends in Mexico like Vetiver Bong and Xicury Dub, as well as older popular cumbia songs but in an electrified cumbia version.

It was a good moment to make his own style of cumbia, outside of the usual expectations, typical stereotypes and beyond traditional styles. Memo is a big fan of old gear and loves to modify them, even circuit bending toys and this can all be heard in his compositions. The Memo Pimiento setup consists of a few 80’s synths and keyboards, a 90’s sampler, Arduino soundcards and pedal effects, analog or modified.

To set the record straight; Memo Pimiento is not a one man band, but actually a trio! His girlfriend Manon Amen (nicknamed Man.on) is the voice of the band who literally switches on people during live shows. She is the MC and brings the festive vibe from the stage into the room, screaming and dancing with the crowd. Their third band member, Victor Hugo, is a Cuban percussionist. Memo knew him from a salsa group that he once worked with in Brussels and loved the idea to have acoustic percussion on their live shows on top of the synthesizers and the drum sequences. Three very different persons that create a special dynamic on stage.

‘A Todo Dar’ was mixed at the home studio of his friend David Chazam at Chazam Studio. Equipped with a lot of vintage analog gear such as mixers, preamps and equalizers, this gave the album a true retro future sound.

The album can be seen a personal product of Memo’s life in Belgium and Mexico, between these extremes and different worlds, which are opposites sometimes. He created a tripping sound with contrasts but with human senses inside, bringing the sun and heat to Belgium and the cerebral creativity of popular music in Mexico.

We invite you to take a dip into this electrified Mexican music, between cumbia and synth wave! 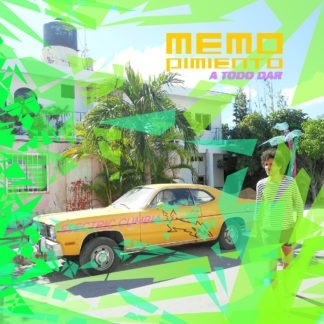