Honest Jon’s Records present a reissue of Derek Bailey & Han Bennink, originally released in 1972. The third release in a series of collaborations between Honest Jon’s Records and Incus: three double-LPs of the legendary free-improvising guitarist Derek Bailey, solo (HJR 200LP) and in duos with Anthony Braxton (HJR 201LP) and Han Bennink, augmenting the original releases with marvelous, previously unissued music. The tussling vegetables in Mal Dean‘s cover-sketch somehow befit perfectly this extraordinary duo of Bailey and the great Dutch drummer Han Bennink. Recorded in London in 1972, Incus 9 was their second record (after an Instant Composers Pool in 1969), becoming a blueprint and inspiration for generations of free-improvisers. It is paired here with a brilliant session from the following year, with the same power and friendly combativeness, and oodles of creativity, technique, and humor. It’s obvious how much they loved playing together. Newly transferred from tape at Abbey Road, and remastered by Rashad Becker. 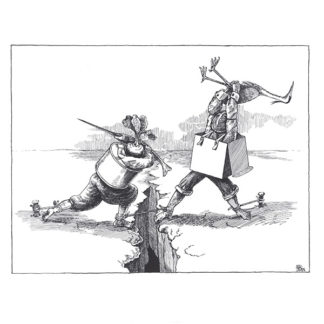