Honest Jon’s Records present a reissue of Derek Bailey and Anthony Braxton‘s Royal, expanded to include both intended volumes. Volume 1 was originally released in 1984; the second volume was never issued. The second release in a series of collaborations between Honest Jon’s Records and Incus: three double-LPs of the legendary free-improvising guitarist Derek Bailey, solo (HJR 200LP) and in duos with Anthony Braxton and Han Bennink (HJR 202LP), augmenting the original releases with marvelous, previously unissued music. Recorded in 1974, at the Royal Hotel in Luton, with Braxton playing soprano and alto saxophones, and Bb and contrabass clarinets. Two volumes were planned; only one was issued, till now. This was an early transatlantic meeting between the leading free improvisers. Many of Braxton’s signature techniques and ideas were gestated in such sessions. It still brims with inquisitive musical creativity and knockabout jazzbo allusiveness. Newly transferred from tape at Abbey Road, and remastered by Rashad Becker. 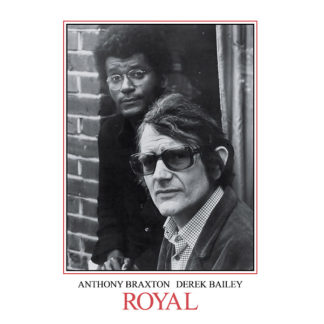