Eddy Detroit returns with a brand-new LP! The legend refuses to diminish. Eddy Detroit crafts eight new songs full of his trademark twisted folk, satanic Americana, and trance voodoo magic. This album ventures into the deranged psychosis of the Phoenix AZ characters that inhibit Eddy’s world. Multiple-personality girlfriends, twisted and rouge hanger-goners, and life as a street musician in the infernal Arizona summer heat. Another cast of local musicians are on board for this record that features cello, ocean drum, piano, guitar, bongos, and violin. This is all capped off by the B-side, a deep, trance-inducing descent into Dante‘s Inferno that features Alan Bishop (Sun City Girls) on vocals, Doug Clark (Victory Acres/Feederz) on synthesizer, and Eddy Detroit on bongos — overlaid with a recording of Eddy Detroit waxing on about his extraordinary life. “Toe Sucker Beach” is meant as an homage to The Velvet Underground‘s “The Gift” — a track that can be listened to as a whole or as a hard pan, with the demented instrumental in one channel and Eddy’s reminiscences in the other channel. This record is another swan dive into the brilliant mind of one of the most original outsider musicians out there. Limited edition of 400. Released to coincide with Eddy’s Detroit’s first European tour in the fall of 2016. 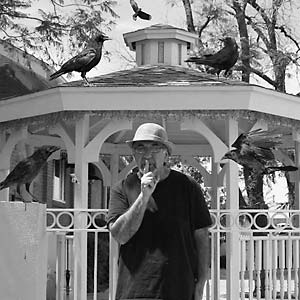