Assophon present an expanded reissue of Tommy Jay’s Tall Tales Of Trauma, originally released on cassette in 1986. “Tucked away between I-71 & US-62 lies nestled the quaint, speed trap hamlet of Harrisburg, Ohio. With its humble ambience, affable familiarity, weekend fish fries and Christian B&B (‘mind the sherry, brother, for it is the Lords nectar’), blink twice and you might think you’ve been transported into a 21st century Winesburg, Ohio. Only now the emphasis is on a new chapter, ‘The songsmith-concerning Tommy Jay‘. In a converted barn just off Main St, Jay and friends have been forging a massive catalog of music, both original and cover variations, for a solid four decades. Fellow towns-person and erstwhile participant, one Mike ‘Rep’ Hummel (Serpent Mound expert, croquet enthusiast) was the first to make these recordings available when he issued a cassette of the proceedings under the title, Tommy Jay’s Tall Tales Of Traumavia his homespun DIY label, Old Age/No Age, in 1986. For anyone prescient enough to lock in back then, they were staggered by talent, far removed from the stars of High Street (Great Plains, Gibson Bros, Willie Phoenix). A singer/songwriter par excellence, Tommy Jay ably forged a hybrid of pre-speedball Stephen Stills with post Iron Cross-headed Lou Reed, the results of which come across as both effortless and visionary. Some 20 years later, Tall Tales would finally receive it’s long deserved elevation to the vinyl format (this time through Columbus Discount Records), and was now being heard by a new generation of ears, garnered immediate success, quickly sold out and inexplicably was never repressed. In the intervening limbo, copies were more sought than found, lucky bumpkins forking upwards to three figures for pride of ownership. Recently, Assophon, a US label with Jim Rockford-like determination, swooped in to un-fuck this glaring wart. Plus, time and patience being the powerful warriors they are, the new, expanded edition is brimming with a whole second platter of hoot; 13 unreleased tracks what’s rarely been discerned this side of Tony’s Coney’s. Which all goes to say that the new and improved, 30th anniversary edition of Tommy Jay’s Tall Tales Of Trauma is, to paraphrase the words of the late, great Randy Poffo, ‘The record the whole world, Jupiter, Saturn, Venus… Or anywhere else is waiting for’.” —Tom Lax Lynx. 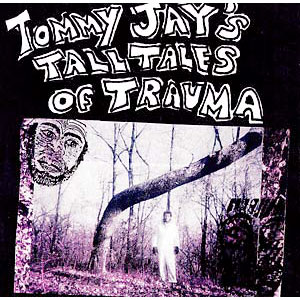