Previously released on CD accompanied by “Gone, Gone Beyond”, “The Mirror” is the dreamy soundtrack of an a/v project from collage artist extraordinaire Vicki Bennett aka People Like Us. With ‘’The Mirror’’ Bennett continues her eternal disassembling of popular music by exploring how the narrative of familiar sounds/songs can change dramatically under a new context, with that context always changing, in a never-ending flow.

Each song is singular. And each song is a collage of and undefined number of other songs from other artists. It sounds familiar because that has been the modus operandi of People Like Us since the early 1990s. But “The Mirror” plays with the notion of familiar, driving around a collection of famous pop songs/artists, messing around with the memory of the listener and, of course, his unique comprehension of those specific songs applied in a new context.

Because of the use of familiar pop sounds, “The Mirror” is often grandiose. Like an epic film only with highs, never letting the listener down or letting him doubt the power of pop. Even, of course, when the coordinates are twisted, mixed, over or underrepresented. Each moment feels like something that could only happen in a parallel universe.

Although that may sound naïve, it’s just a lost thought of reaction to the beautiful collages of People Like Us in “The Mirror”. This mirror doesn’t reflect an image of ourselves or an image of pop. But an image on the way memories drift and are being constant rebuilt. An unfinished collage. 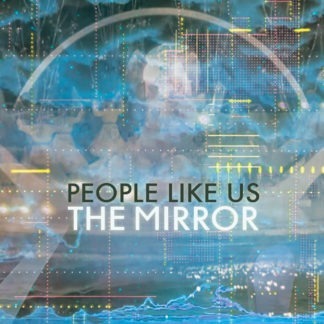 You're viewing: PEOPLE LIKE US : The Mirror – CREP69 LP
Add to cart