AMBROSE CAMPBEL : London Is The Place For Me 3 – HJR021LP

2018 repress; 2006 release. Ambrose Campbell was acclaimed by Fela Kuti‘s generation — by Fela himself — as the founder of modern Nigerian music. Several of his recordings lit up London Is the Place for Me 2 (HJR 016LP, 2006), and Volume Three is devoted to his music, drawing on the 78s he cut in London over ten years from 1949. Nearly all the tracks assembled here come from recordings made for the Melodisc label and originally released as 10″ 78 rpm singles. People who bought these records at the time can still recall how it was when the percussion team — among them Ade Bashorun, Salustiano, Dos Anjos, Manny Myers and “Lati” Pedro — built their polyrhythms in Ola Dosunmu‘s kingdom. With the melodic guitars of Brewster and Ambrose coming together behind Campbell’s soothing voice, the musicians contrived to paint an evocative, enduring picture of palm wine Lagos nights.” —Val Wilmer Features: West African Rhythm Brothers, Nigerian Union Rhythm Group, Ayinda Bakare And His Meranda Orchestra, Nigerian Union Rhythm Group, and West African Rhythm Stars. 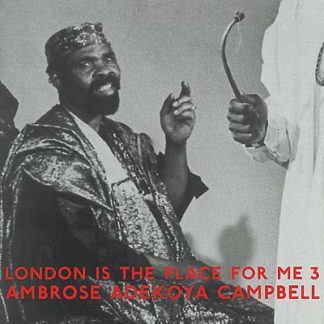 You're viewing: AMBROSE CAMPBEL : London Is The Place For Me 3 – HJR021LP
Add to cart