Misztériumok is the third full-length record – their first on three:four – of Italian duo Amuleto, composed of Francesco Dillon and his cousin and three:four’s artist Riccardo Wanke.

Following the route of previous releases this new album emerges as the fusion of composed and improvised forms and moves between contemporary and electronic music mixing acoustic, electronic and real world sounds. The music takes shapes from a progressive disclosure of sonic material that gradually manifests its nature: at times aggressive and distorted, other times ephemeral and intimate. Cello, electronics, field recordings and a large variety acoustic timbre merge into a unique sound. More intensively than before, Amuleto in these five pieces condenses their aesthetic within intense evolutions, concrete attacks and tight musical constructions.

This work takes inspiration from a series of old photos (as negative silver bromide glass plates) found in the ‘Feira da Ladra’ flea market in Lisbon. They depict scenes of middle-European family life at the start of the 20th century mixing what seems an ephemeral serenity with an imminent sense of crisis and loss.

All music by Amuleto, except for Urlicht’s theme by Gustav Mahler.

Recorded in Lisbon and Florence between September 2015 and April 2017. Mastered by Giuseppe Ielasi. 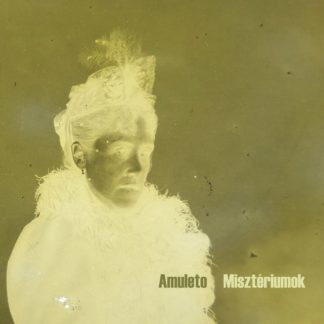