Although his albums are full of the same qualities as those of many other star saxophonists / flutists playing spiritual jazz, Frenchman Michel Roques is often classed as a “supporting artist” or a “musicians’ musician”, forever in the background, and often left out of the reference books. Adding to this lack of recognition is the fact that Michel Roques was seriously under-recorded: five albums as leader in a career of almost twenty years does not amount to much! Thankfully, in 1972, Pierre Barouh, boss of Saravah, records made up for the injustice by offering him the opportunity to record ”Chorus” in studio, providing a continuity with the equally brilliant ”Safari” made four years earlier. An ambitious work, ”Chorus” owes much to the unusual ‘augmented’ rhythm section, the inner structure of which is none other than that used in the Parisian trio of pianist Mal Waldron at the end of the 1960s: namely Patrice Caratini on bass (completed by the cello of the amazing Jean-Charles Capon) and Franco Manzecchi on drums (seconded by the percussion of Humberto Canto). Another notable singularity is that Michel Roques had the excellent idea of excluding the piano, traditionally employed in this kind of context. This didn’t prevent ”Chorus” from being played on French TV in 1973 with a piano replacing the cello, and a different voice reciting the beat-style poems of Nicole Roques, that of actor Jacques Degor, occasional collaborator with Jef Gilson but far less convincing than Bachir Touré, wisely chosen for this recording for his style inherited from Afro-American preachers and capable of holding his own with the wild improvisations. In its own way, ”Chorus” is one of the key albums mixing free jazz and spoken word ‘à la française’. It is also a militant concept album which has lost nothing of its political force. 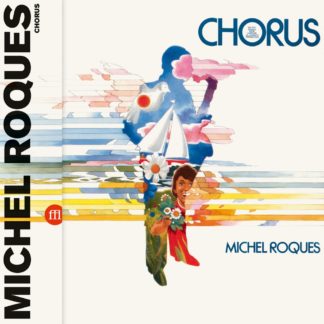