Although Sir Richard Bishop (SRB) and W. David Oliphant (WDO) worked together periodically in the ’80s through Sun City Girls and Maybe Mental, they never set out to simply work together as a duo. Fast forward to 2011, SRB, feeling the need to temporarily step out of his solo guitar zone, approached WDO with the idea of this joint collaboration… Beyond All Defects was composed and recorded live in the studio in Phoenix, Arizona in December of 2011 (remastered in 2018 by Mark Gergis) and presented on vinyl for the first time by Twenty One Eighty Two Recording Company. The sonic landscapes presented here find their origins in Tibet, and are heavily inspired by Tibetan Buddhism — specifically the body of teachings known as Dzogchen. Many of the musical ideas for this project were literally derived from dreams the night before they were created. The remaining ideas were formed centuries ago. Sir Richard Bishop plays acoustic guitar throughout. Often detuned, bowed, and beaten, the guitar was “treated” by Oliphant during the live recording process. SRB also provided audio from field recordings he captured in India. WDO used a variety of computer software with a MIDI controller to create all the other sounds. All tracks were captured in real-time, direct to disk. Beyond All Defects is the first in a series celebrating the audio adventures created by Arizona sonic composers. Clear vinyl; Edition of 500. 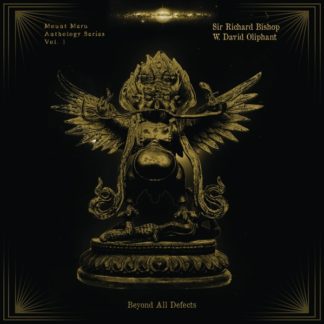