2019 repress. Honest Jon’s presents a collection of music from ’60s and ’70s West Africa that is heavily influenced by Latin sounds from the era, representing a mutual cultural exchange that would have a permanent impact on the evolution of each region’s trademark sound. Much of what makes modern Latin music so irresistible came from Africa in the first place. When the first waves of African rhythms, reconstituted in the Caribbean, returned home on radios and records, Africans — especially in West and Central Africa — received them with great enthusiasm. Staid dance bands that replicated European music soon began to swing as Caribbean accents settled in their rhythm sections. By the 1950s, Africa had produced its own Calypsonians, and more than one African musician changed his name to give it a Latin flavor. Some even composed songs in Spanish, while others wrote nonsense lyrics that only sounded like the real thing. No band mixed local and Latin styles more successfully than Orchestre Baobab and its leader Balla Sidibe. The mesmerizing “On Verra Ca” finds Baobab leaning in the direction of the stuttering mbalax sound that Youssou N’Dour carried to great popularity. Other Senegalese bands followed the trend, like the Rio Band, Orchestre N’Guewel, and Laba Sosseh from Gambia (like his compatriot Amara Toure) who styled himself as a salsa singer after his hero Johnny Pacheco. From Benin, Gnonnas Pedro sang in every pop style imaginable, but he seems especially at home in an Afro-Cuban embrace, as you will hear on the 1977 recording “Adigbedoto.” The closing track also comes from Benin, a 1976 recording by the celebrated Orchestre Poly Rythmo — though the singer, Pierre Tchana, hails from Cameroun. “Quiero Wapacha” features another Camerounian singer, Charles Lembe, and also from Cameroun is legendary African Jazz saxophonist, Manu Dibango, who is featured here alongside Le Grand Calle and Cuban flutist Don Gonzalo. Orchestre OK Jazz recorded any number of Afro-Cuban inspired sides: “Micorrason” is one of the band’s earliest songs, recorded soon after their formation in 1956. There is no better evidence of the push-me-pull-you, back-and-forthing between two cultures than the Afro-Latin compilation we have here. All the flow from an unparalleled period of exuberance and creativity after World War II had ended and before homegrown tyranny had yet to descend on the land. It was Africa’s moment, optimistic and free. You can hear it in the music. –Adapted from text by Gary Stewart, author of Rumba On The River: A History of the Popular Music of the Two Congos. 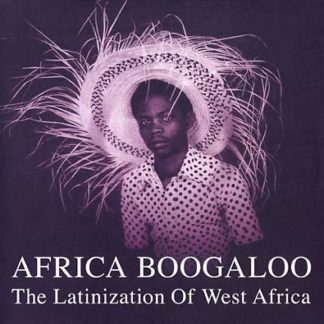 You're viewing: VA – Boogaloo The Latinization Of West Africa – HJRLP041
Add to cart