Deluxe double LP version, in a beautiful gatefold sleeve. This is the fifth release in Honest Jon’s series of albums exploring vintage recordings held in the EMI Hayes Archive. This album uncovers the dizzy beginnings of the golden age of African music zinging with the social and political ferment of the independence movement and anti-colonialism, after the Second World War and the daredevil origins of Congolese rumba — the entire continent’s most popular music in the ’60s and ’70s. The new music grew in concert with a burgeoning night life especially in the twin capitals of Leopoldville (today’s Kinshasa) on the Belgian side, and Brazzaville on the French, where humming factories lured increasing numbers of rural Congolese with the offer of a steady, relatively well-paying job. The astonishing inventions of Europe and America also played an important role in the music’s development. Traditional Congolese musicians began to master imported guitars and horns by mimicking what they heard. The jazz of Louis Armstrong and the ballads of European torch singers like Tino Rossi captured the imagination of the rapidly-expanding working class as well as the familiar-sounding music of Latin America. Local musicians swapped the Spanish of the originals for Congolese languages. In his version of “Peanut Vendor,” included here, A.H. Depala replaces the seller’s cry of “mani,” or “peanut,” with a lovelorn lament for a woman named “Moni.” Depala went on to land a spot in the house-band of the prestigious Loningisa studio. Others failed to gain equivalent recognition, but their music was no less impressive. Listen to likembe (thumb-piano) player Boniface Koufidilia as he makes the transition from traditional to modern in the first few seconds of “Bino,” which hits you with a vamping violin while he muses about death (including that of the popular Brazzaville musician Paul Kamba). Andre Denis and Albert Bongu both echo the sounds of palm-wine brought to the Belgian Congo by the coastmen. The sweet vocal harmonies of Vincent Kuli‘s track were learned, perhaps, in a mission church. Rene Mbu‘s nimble, likembe-like guitar plucking shines on “Boma Limbala,” and is Laurent Lomande using a banjo as a backdrop to “Elisa?” Aren’t those kazoos, buzzing along on Jean Mpia‘s “Tika?” It’s as if the musicians, fired up by the times in their zeal for experimental self-expression, tossed into a bottle some new elements and some old, some near and some far, and then shook it hard, to see what would happen. With insert featuring rare photographs and notes by Gary Stewart, author of Rumba On The River. Sound restoration done at Abbey Road. 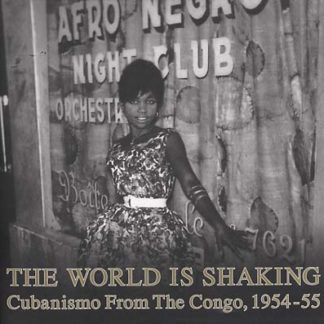