2019 repress. Deluxe 2LP version in beautiful gatefold sleeve. Marvellous Boy: Calypso From West Africa celebrates the West African counterpart of the 1950s Soho scene uncovered in the Honest Jon’s series, London Is The Place For Me. Issuing from centuries of to-ing and fro-ing between England, the West Indies, and West Africa, the same musical styles — calypso, highlife, jazz — overlap, proliferate, and adapt, with local traditions freshened up and thrown into the mix. With numerous faces and reference points cropping up in both milieu, this contemporaneous music-making is brimming over with the same passion for life, sparkling topicality, and extravagant, magpie creativity. The inter-war dance bands of British West Africa are often strikingly similar in sound to Trinidadian orchestras like Lovey’s String Band (credited with the first calypso recordings in 1912). However, the first West African calypso recordings in the modern style are from Freetown, Sierra Leone in the early 1950s, by Ebenezer Calendar and Famous Scrubbs. In arrangements blending African and European instruments, the brass plays out the legacy of colonial military bands, albeit hair-down and a little ramshackle now; and the beautiful Creole lyrics are as quick and musical as any classic calypsonian’s. Decca also organized the first calypso recording session in Ghana, down the coast, where a sound interchangeably designated “calypso” or “highlife” ruled urban dancefloors, courtesy of The Tempos and its spin-offs including The Rhythm Aces. The invasion of King Mensah of Ghana, and The Tempos’ money-spinning tour of Nigeria at the start of the 1950s sparked a decade of musical innovation. Bobby Benson‘s new highlife 11-piece included the great trumpeters Victor Olaiya and Roy Chicago and his calypso “Taxi Driver” was their first, huge, signature hit. (By contrast, little is known about the Nigerian Rolling Stone). The Mayor’s Dance Band was run by the celebrated Erekosima “Rex” Lawson, whose trademark blend of Igbo lyrics over a Calabari rhythm reflected his mixed parentage. Steven Amechi was from eastern Nigeria, and the guitar solo on “Nylon Dress” is by the king of Igbo highlife, Stephen Osita Osadebe. Saxophonist Chris Ajilo and his band The Cubanos didn’t produce much calpyso-highlife, but rather, cooking Afro-Cuban jazz with traditional roots, exemplifying the open hybridity of all these forms. By the early 1960s, calypso was fading in West Africa, and U.S. soul and rhythm and blues were poised to replace Caribbean influences. Still, the dying embers would produce its most classical exponent, Godwin Omabuwa, Nigeria’s own Lord Kitchener. Omabuwa cut only a few records, but his mastery of the genre was a fitting end to the heyday of calypso in British West Africa. 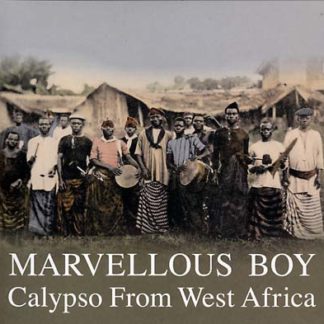