he Hour of Two Lights is a genre-bending work that fuses Arabic and Jewish musical forms, Asian and East European sounds, hip-hop atmospherics, wild Romani passions, and slamming beats. In short, an album quite unlike anything you’ve ever heard from Terry Hall before. That is partly because The Hour of Two Lights is not a Terry Hall solo album, although it may have started that way. First, Mushtaq, once of British-Asian pioneers Fun-Da-Mental, came on board as an equal partner. Then the cast-list expanded to include a Tunisian singer, a Syrian flautist, an Egyptian who had settled in Iraq, Hebrew vocalists, Turkish musicians, a 12-year-old Lebanese girl called Natasha, a blind Algerian rapper from Paris, a troupe of Polish Romani refugees, and a septuagenarian clarinetist famous for playing the Pink Panther theme. And Blur‘s Damon Albarn is also in there somewhere. And yet The Hour of Two Lights is not a world music record, or a DJ album. It’s not even a DJ album with world influences. “I don’t think it fits with anything, really,” Hall says. “I don’t really know what it is. Or what it isn’t.” Which, of course, isn’t very helpful in a world that demands instant categorization and easy pigeon-holing. Yet there is a unifying thread that comes from a shared humanity. “We wanted to take influences from everywhere,” Hall says. “But it’s not a bish-bosh of other people’s cultures. Everybody had a sense of something in common in their minority and oppression and struggle. In the end, it felt more like we were editing a film than making a record.” As the songs took shape in all their unconventionality, more and more voices were added. Lyrics were translated into different languages, including Arabic, Hebrew, and Romani, with music as the Esperanto that united different cultures, traditions, and temperaments. 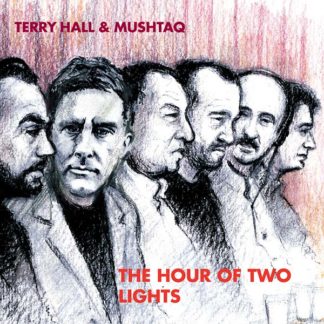